How NOT to Respond to Negative Reviews 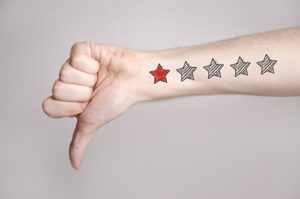 Any business, whether a Fortune 500 company or a local mom and pop store, can suffer from bad publicity. With the amount of activity on social media sites like Facebook and Twitter, one person’s complaint about a particular aspect of your business can quickly turn into an avalanche of negative feedback if not handled properly. Worse still, handling the initial negative comment or comments incorrectly can have an even more damaging effect on your business and its image.

All it takes is one bad response to a negative review to start an ugly argument; the result being that poor response can tarnish your business’ reputation for a long time. When you respond badly to a negative review, your response won’t just be read by the initial reviewer. What you say can and likely will be read by everyone who reads your reviews or looks for your feed, whether it’s on Google, Facebook, Twitter, Yelp, or any other platform. It also shows that you can’t take criticism gracefully, and no one wants to do business with someone if they fear backlash from giving an honest review that is less than five stars.

What’s the proper way to respond to a negative review?

Regardless of how good your products and services may be, at some point, someone is going to feel like they got short changed. It’s just a fact of business. Twenty years ago, it may have resulted in an angry call or letter, but these days, an angry customer has the power to create a wave of distrust or fear with a few well-placed reviews. Take these steps to help prevent further damage: